For the last couple of days, Patrick and I were in Essen for E-World. As usual, the trade show was huge (bigger even?) and attendance seemed very good – it seemed to me to be more crowded even than previous years. Of course, all the flamboyant booths were there and all of the familiar names (although CEZ and PXE were both notably absent and so were Triple Point among the vendors) but the standard of give aways seemed down to me…. Although, I make that statement relatively tongue in cheek, the last time the giveaways were so poor in Essen it wasn’t a great time for the industry and so I am wondering if the E-World Freebie Index decline portends something? 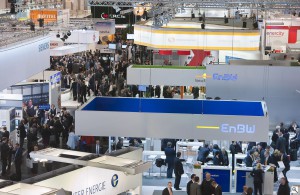 Nonetheless, we were able to meet clients and prospects as well as friends and colleagues and it remains a must attend event from our perspective. We visited with OpenLink (new booth this year looks good), Brady PLC, Allegro (another good looking new booth!), SunGard Energy (CEO of recently acquired Energeya was on the stand too), Powel Delta, Trayport Contigo (another new booth – well designed), GMSL, CapSpire, Ponton/EFETNet amongst others and met with people from DataGenic, IP Systems, ETR Advisory, Pioneer, Ignite, Temenos and UniCredit as well. It was a busy two days to say the least.  Apologies to those not mentioned.

Of course, with everyone away in Essen we may have missed a couple of news stories however, now we are back, normal CTRMCenter service will now resumed. While we were gone however, we did issue an interview with Trayport Contigo executive Mr. Tim Rogers and a video interview with Mr. Richard Quigley and Mr. Eric Fishhaut of DataGenic….

Trayport Contigo – One Year On