Following months of accusations that Russia has been transporting thousands of tonnes of stolen Ukrainian grain to foreign buyers, a new report reveals the role of deceptive shipping tactics in facilitating these sales.

According to maritime intelligence firm Windward, the number of Russian or Syrian-flagged bulk carriers “going dark” has surged in recent months as Moscow and its allies seek to shift pilfered crops.

Between July 2021 and June 2022 there was a 160% increase in dark activities by grain-carrying vessels in the Black Sea versus the same period last year, Windward says in the analysis.

Dark activities refer to instances where ships turn off their automatic identification system (AIS) in a bid to disguise their location, though there are less sinister reasons why a vessel may lose signal, such as bad weather, or if the operator is attempting to navigate dangerous waters.

The method has been well used by heavily-sanctioned energy producers in the past, not least Iran and North Korea, to earn export revenues – and concerns have also been growing over the possibility of Russia using such tactics to continue selling oil globally.

Windward says these old behaviours are now being applied in a new way to move stolen grain.

Russia has been accused of stealing up to 500,000 tons of Ukrainian wheat worth US$100mn since the outset of the invasion, the New York Times reported last month. Ukrainian officials claim much of this has been trucked to ports in Crimea, then put onto ships.

When looking at all general cargo and bulk carriers irrespective of flag – using data from March 1 2022, to July 15 – Windward says it flagged a total of 170 events where such vessels went dark in the Azov Sea and then resurfaced on their way out through the Bosphorus Strait.

The Strait is a significant waterway in northwestern Turkey and offers a route for ships on the Black Sea to head to destinations globally.

Out of these instances, 156 all showed a similar pattern whereby a vessel allegedly carrying smuggled grain called at its port of destination with its AIS turned on. 71% of these visible port calls took place in Turkey and 20% in Bulgaria.

Windward says the remaining 14 events showcased a “different pattern” and saw the vessels go dark twice during their travels, once in the Azov Sea and again at their next port of call, typically Syria.

While the number of ships going dark twice is comparatively small, the report says there was only one such instance of this between March and mid-July 2021. “This type of behaviour is emergent,” says Windward, adding it expects to see the trend “grow as the conflict continues”. 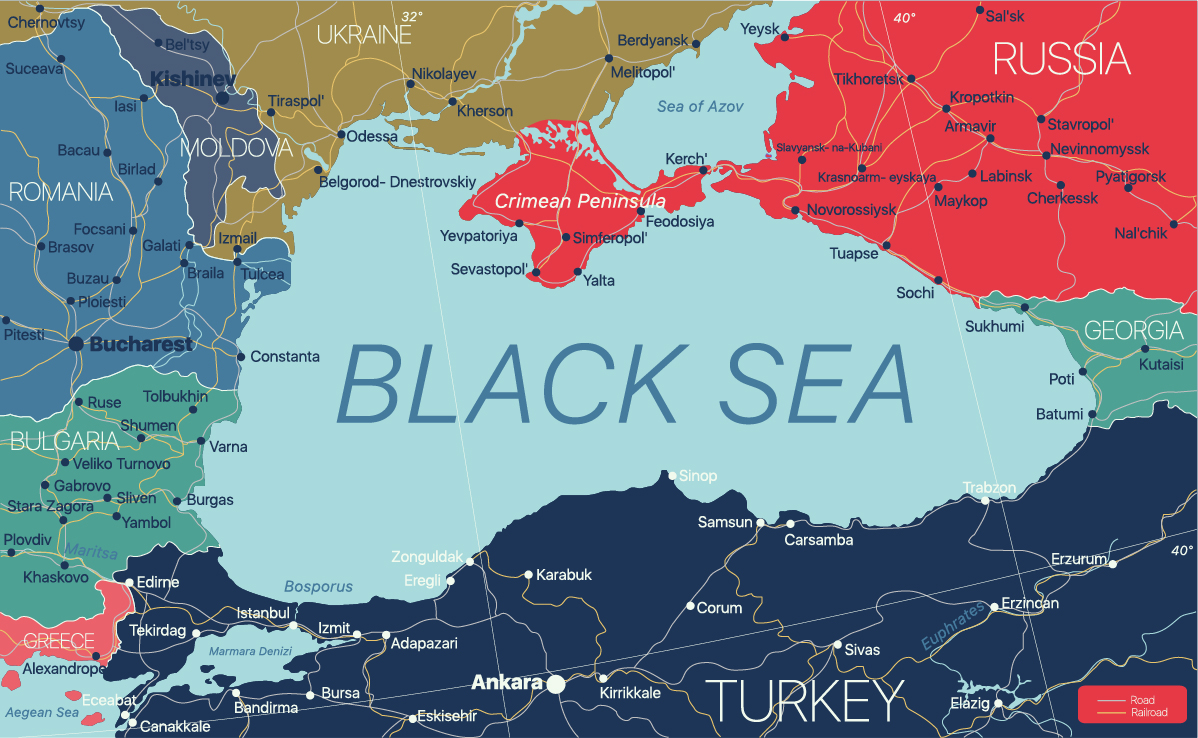 Alongside dark activity, Windward flags the emergence of ship-to-ship transfers as a means by which Russian entities are seeking to launder grain stolen from Ukrainian farmers.

Windward analysts say they have spotted ship-to-ship operations involving as many as five different vessels in the Kerch Strait, a waterway off the Crimean coast joining the Azov Sea and Black Sea.

One such meeting took place on June 10, when three cargo ships and two service vessels grouped together in the area and possibly exchanged grain that was later discharged in Turkey, the report says.

A ship identified in the report as vessel D sails under the Belize flag and is owned by a Turkish company.

Following the ship-to-ship operation in the Kerch Strait, Windward says vessel D made a port call in Turkey, and  its draft reduced from 9.9 metres to 6.2 metres, indicating a potential discharge of cargo.

Efforts to restore Ukrainian Black Sea exports have ramped up in recent weeks amid heightened concern over the threat of a global food crisis.

The US government recently emphasised that sanctions against Russia do not apply to trade in agricultural commodities or fertiliser. A US Treasury Department confirmed as part of a general license issued on July 14 that businesses, insurers and banks can support such transactions.

Meanwhile, following weeks of build-up, Russia and Ukraine signed a UN-backed deal in Istanbul on July 22 that aims to allow for the resumption of Ukrainian grain exports via the Black Sea.

In theory, the agreement would secure safe passage of grain and other essential goods such as sunflower oil from three Ukrainian ports, as well as the trade of Russian-made fertiliser products.

In the coming weeks, Turkish and UN officials will monitor the loading of grain onto vessels docked in Ukraine before navigating a pre-planned routes through the Black Sea, where Russian and Ukrainian mines remain a threat.

Both Moscow and Kyiv agreed to pause attacks on any commercial vessels or ports engaged in the transport of grain.

Ukrainian President Volodymyr Zelenskyy said the pact would mean around 20 million tonnes of stranded grain from last year’s harvest, worth roughly US$10bn, would now be available.

But analysts have warned the deal could be in jeopardy after Russian forces fired two missiles into the port of Odesa port just hours after the agreement was signed.

At the same time, the Windward data show that western sanctions designed to squeeze Moscow’s economy and war chest are often failing. Russia has continued to find willing buyers for stolen grain in friendly countries, while its oil export sector has reaped the reward from booming prices.

According to a June report from the International Energy Agency , Russian oil export revenues were estimated to have increased by US$1.7bn from April to May to about US$20bn.

Disclaimer: This was news article was published by another website and was republished on the CTRM Center due to its informative merit and relative nature. If you have any issue with this post please contact us